Arizona Over The Counter Bear Hunts

Arizona Over The Counter Bear Hunting

One of the most over looked and under appreciated hunts in Arizona are the over the counter fall and spring bear hunts.

When most people think of bear hunting in the west, they picture themselves looking over over alpine Meadows, clear cuts and maybe recent burns high up in the mountains of Montana, Idaho, Oregon and California. Cold temperatures and backpacking or driving logging roads. In Arizona, we glass big, open, cactus covered slopes in the fall at elevations as low as 3,000 feet some years.

There are also some spring hunts that require you to draw a tag. The good thing is, you can hold an over the counter tag AND a draw tag which basically allows you to hunt bears most of the year. Remember though, JUST ONE BEAR PER YEAR.

In the fall, the bears come down out of the thick chaparral and pine forest to feed on the ripe prickly pear fruit. This is a great time to find a large bear, if you can stand the heat. It can be very warm on these hunts and the bugs can be bad on wet years. Sun screen and bug repellent are two must have items. Oh, and water. Lot's of water.

When there is a good pear crop and fewer acorns up high, the bear hunting can be fabulous down in the low desert. Look for long, open slopes that come down from the higher mountains. Usually the southeast slopes have the most cactus, but it does grow on the shady north slopes too and if you can find a north slope with good cactus patch it can be a real honey hole.

Being hot and the fact that bears are wearing a full fur coat, they are not normally out feeding much during the midday hours, but if you know where they are feeding at night and in the low light hours, you can get on them at first and last light. They tend to head for shade and water not long after sunrise, but will often come out early in the afternoon to start feeding in shady spots on the mountain.

Often times, you spot a bear at first light, far off, and he is heading for cover. Instead of charging after him, hoping to catch up before he goes out of sight, try just watching where he goes for shade. After the bear is in his daytime bedding area, make your move to be in a shooting position for when he comes back out in the afternoon. Very often, they will go back to the same spot to feed or at least come out of the cover in the same spot they went in.

Another thing that is important, as you might guess, is water. Deep, rocky canyons often hold pockets of water in the fall from the monsoons and in the spring from the snow run off. If you are hunting more gentle slopes then look for game and fish trick tanks, cattle ponds, and steams nearby.

Even in the middle of summer, you can find water in the desert.

When the acorns are abundant up higher, the bears will tend to stay up there and feed in the oaks. You can hunt the oaks too, but the glassing is a little harder. Calling works good in these areas.

Another good fall food source can be manzanita and juniper berries. Manzanita is a bush with red, woody branches and the berries are small and red. It often grows in old burns and can very thick on an entire ridge or mountainside.

Junipers are evergreen / cedar type trees that produce a purple berry in the fall. They often grow in the same areas as prickly pear and when the pears and junipers are both ripe at the same time can be a fantastic spot to glass.

this bear has been feeding in a manzanita patch

Being in decent shape is a requirement for most of these hunts. Bears like remote areas that get little human activity, away from roads, but if you willing to hike one or two ridges away from the roads, your chance at seeing a bear is good.

All fall bear hunts are over the counter - you do not need to apply for a tag, just buy it. It is important that you call the bear hunt information line before hunting to make sure the unit you plan to hunt is still open. When female harvest objections are met, the hunt shuts down the following Wednesday. On good ears the first fall season often shuts down the first Wednesday of the hunt.

These hunts area called 'spring" hunts, but the best hunting occurs in early and mid summer when the temperatures get hot and bears are forced to go to water daily.

In the spring, we scout remote water holes. This is the best way to locate spring bears. They tend to stay in the remote and rugged canyons that have water close by. Spring bears do not move around as much searching for food, but because temperatures in early spring are very warm in AZ, they come to water frequently. Sometimes they come just to get in the water to cool off and escape the bugs.

Springs, rock pools and remote trick tanks are all good spots to check out when looking for spring bears.

Spring bear hunting is all about finding water

Calling for spring bears can also be effective. Especially later in the summer when the deer fawns are born. Using a fawn bleat in a big canyon where the sound can travel far is a good strategy. When calling bears, you must be really patient and call non stop for a long time. Up to an hour or longer. Bears come in slow and if you stop calling, they lose interest fast.

Food sources for spring bears are fresh, green grasses, last years left over acorns, roots, berries, mushrooms, bugs and even winter killed game or cattle. Blackberries and wild raspberries grow in the bottoms of moist canyons where a spring or seep provides year around water and damp soil. These can be hot spots if are willing to hike in go look for them.

There are both general season hunts and draw hunts for spring bears. Check the latest regulations for open seasons. It changes year to year and you must always call the bear hotline to make sure that season quotas have not been met.

There are several units where you find good bear hunting. Units 22, 23, 24A, and 27 are are a few of the better ones. These units offer a combination of remote country, deep canyons, water and diverse food sources that bears need to survive.

There is a good population of black bears in unit 22 and almost every year the female harvest quota is met. Finding a steep, south facing slope with prickly pear cactus, manzanita and / or juniper trees should be your first priority in the fall. For spring hunts, look for water in the bottom of steep rocky canyons and do some research on the more remote water tanks in the Unit,

Unit 23 - Similar to unit 22, with lots of Wilderness Areas (Salome, Sierra Ancha and Hells Gate) and a lot of remote, rough country that bears favor.

Bears can be found in almost all portions of the unit except the low desert areas around Roosevelt Lake. The Cheery Creek drainage run almost the entire length of the unit and many of the cuts and ridges leading down to the creek from the higher elevations have good numbers of bears. Parallel Canyon and the Hagler Creek area also have a good concentration of black bears. Also take care to explore Middle Mountain and Aztec Peak, especially when there is a good acorn crop. During the fall hunts, this unit often shuts down after the first weekend due to female harvest objectives being met.

Unit 27 - Unit 27 has the most bears of any unit in Arizona. It is very rough, has a lot of remote, roadless country, elevation ranges from near 10,000 feet all the way down to 3,500 feet in the southern sections. Heavy forested pine ridges in the north, above the rim and prickly pear and mesquite in the lower elevations.

Bears can be found through out the unit, depending on the time of year, available food sources and water but the northern half has the biggest concentrations.

The middle section of the unit, around Rose Peak, Juan miller Road and over to the east toward the San Carlos Reservation offers great opportunities to find fall bears feeding on pears and junipers. Great glassing points abound that let you look over vast areas. The caveat is that it is often rough and steep and the bear you find might be a several hour hike to get to. Make sure you are prepared to not only hunt effectively, but to get your bear meat and hide out quickly if you are lucky enough to kill one.

the Raspberry Creek and Stray Horse areas a little farther north also off great glassing in areas that were burned several years ago.

Glassing for bears in unit 27, Arizona

Trail cameras - Trail camera can be a great way to scout for bears. Bears are not as numerous as elk, deer, javelina etc and glassing for them can be hard. You are not going to see bears every time you go out to scout, especially when you are looking over new areas.

Using trail cameras to find bear concentrations is the most efficient way to scout. You will use less gas, put less miles and ear and tear on your vehicle and be more effective finding bears by using the cameras on water, saddles on ridges with steep slopes on one or more sides, canyon bottoms with water and shade etc.

A remote spring or deep rock pool in a canyon bottom is most effective. If there are bears in the area they almost certainly come to these water sources at some time. If water is limited, they might come everyday during the summer.

Make sure you protect you camera with a box if you are targeting bears on water. It is a given that you will get cameras stolen off water if you do this long enough, but bears will also mess with them and often break them if not in a box. Elk are known to break them too.

You can also look for oak trees that are dropping acorns, saddles on ridges that lead to open, prickly pear covered slopes, patches of manzanita or oak covered ridges are also good bear travel spots that you can utilize a game camera on.

There are a lot of good camera manufactures. Some of my favorites are Stealth, Browning and Moultrie.

Be aware, the rules for the game cameras have changed slightly. The cellular type that send you pictures via email or text are no longer legal in Arizona. Also, you cannot use attractants such as bait to lure a bear into your camera. You can use salt for deer and elk but NOT for bears. 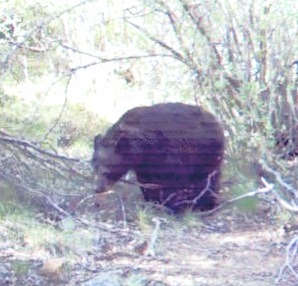 Each scouting package will include the following:

We also have scouting packages for Mule Deer, Coues Deer, elk and Javelina

Go here for more info on these affordable options for DIY hunters.

you can find more information on our scouting trip here -

Javelina - Springtime Fun in the Desert